Some persons believed to be members of known NDC vigilante group, the Hawks, shot indiscriminately at the party’s office on Monday killing one and injuring another person after a misunderstanding.

“We are saying that those who are insinuating that they are hawks or vultures or eagles and so on, we don’t care…the police should not look at party colours; they should pursue the perpetrators as perpetrators of crime, and deal with them according to the law. Whether they are from our party or they are from outside our party is immaterial. Look at what their crimes are and pursue them,” he added.

Asiedu Nketia made the comment on Behind the News on Radio Ghana on Monday.

Four persons have so far been arrested in connection with the shooting.

Condemning the shooting incident, the NDC scribe said the law must take its full course and deal with the perpetrators of the dastardly act.

The shooting incident is said to have happened when the National Chairman of the party, Samuel Ofosu Ampofo, the General Secretary, Johnson Asiedu Nketia, and the Regional Executive Committee met at the office to iron out some growing issues within the NDC in the Ashanti Region.

There were traces of blood stains around the premises of the office when Citi News got there on Monday afternoon.

The NDC Secretariat in the region immediately condemned the shooting and described it as regrettable.

“The regrettable incident occurred while a meeting between the National Chairman, The General Secretary, a Deputy General Secretary and the Regional Executive Committee were ongoing. Some men on Motorbike wielding guns attacked a gathering outside, short indiscriminately and sped off.”

“We regret to announce that one of the two men who were shot has passed on and the other is in a critical condition at the Komfo Anokye Teaching Hospital (KATH),” a statement signed by NDC Ashanti Regional Secretary, Kwame Zu added.

Former President John Dramani Mahama also condemned the shooting incident and called for a swift investigation into the matter. 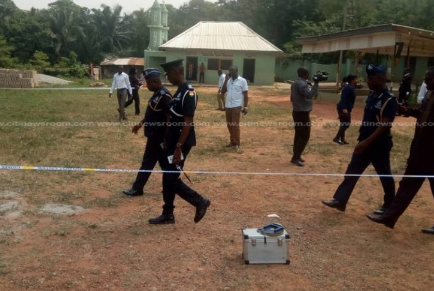 “I have been briefed about the shooting incident that occured in front of the Ashanti Regional Office of the NDC leading to the death of one person and injury to another.”

“I strongly condemn this incident. It is clearly a criminal act, and I call on the police and relevant security agencies to investigate and immediately apprehend the culprits and subject them to the full rigours of the law.”