As Part of the Ghana National Petroleum Corporation (GNPC) Foundation’s core objects towards providing sports infrastructure, the Foundation has cut sod to begin the construction of an Artificial Turf at Suhum Roman Park in the Suhum Municipality of the Eastern Region.

Dr. Kwame Baah-Nuakoh, General Manager, Sustainability, who joined the Member of Parliament and chiefs of the area at the sod cutting ceremony to commence work on the pitch, said the Foundation plans to do six (6) artificial turfs every year for the next four years.

According to him, the turf which is a “modern Barcelona standard type” will serve as a playing field for the school, the entire community and its environs.

He stressed that the field is proven to provide the most grass-like playability and thus urged the authorities to take good care of it, added that, it will also to help cut down cost involved in sending national teams outside the country to train due to lack of professional pitches. 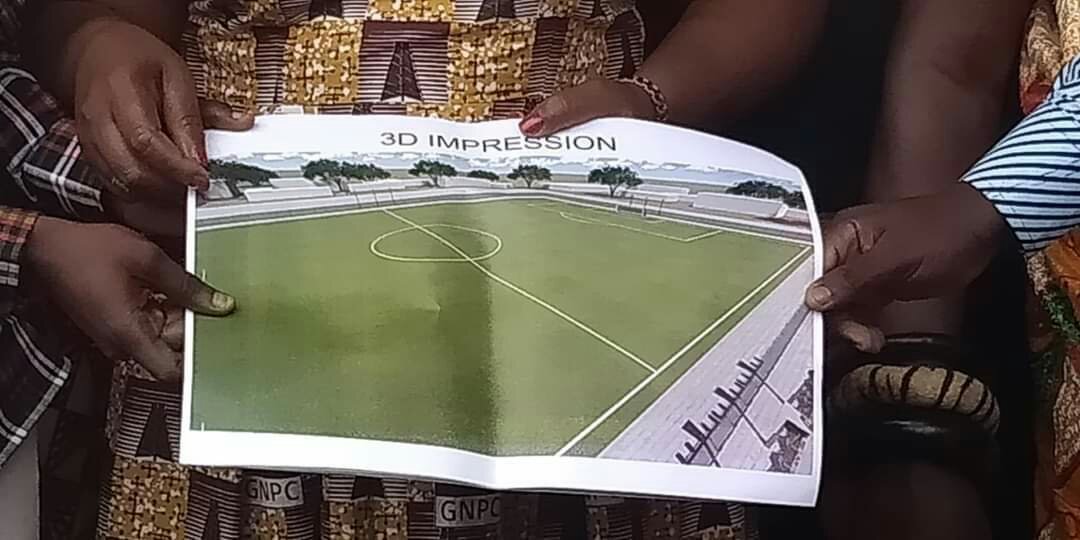 Dr. Sarpong noted that, the pitch when completed will comes with a fence, four (4) floodlights and a standby generator to provide light in the evenings when there is light out which will make the facility usable at all times.

Other places that will be benefiting from this project include; Efiekuma in Sekondi in the Western Region, Asokwa and then the Brong Ahafo Region. The Tarkwa T &A Park is also set to be converted into an artificial Pitch with major improvements all over.

He also explains that the GNPC which has been a long-term financier of the Black Stars has seen that they should come up with lasting projects and invest in them to benefit the country for the long-term rather than just financing National teams to play matches outside of the country.

”The GNPC uses oil money to support the Black Stars and in carrying out its CSR activities but because the oil may not be there forever, it is essential that environment and social amenities that will benefit society. Particularly provide sporting infrastructure that will be of long-term benefits to the public” he noted.

He noted that, the GNPC as part of it cooperate responsibilities is putting up six artificial turfs for some communities across the country and 40 classroom blocks in support of government’s Free Senior High School policy before the commencement of the 2018/2019 academic year through its Foundation.

The Member of Parliament for the area, Frederick Opare Ansah who facilitated for the pitch explained that, the government is committed to the development of the youth hence doing its possible best to give them the assurance.

According to him, he is optimistic that, the pitch when completed will go in a long way to unravel hidden talents for the country.

Opare Ansah explained that, ‘’ In the quest of developing the constituency in all sectors, this recreational center will boost the teeming youth in the area of sports’’.

Opare Ansah, further urged his constituents especially those who will be taking care of the pitch to ensure timely renovations are done to sustain it for a long time, and also called on them to support the government in its policies.

The project which is expected to be completed in the next six months as the Suhum one is the fifth among the others across the country.