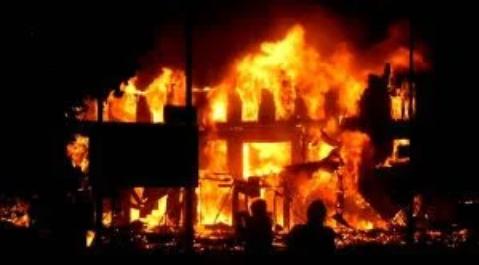 A Chieftaincy disputes at Dompim-Pepesa a community in the Tarkwa-Nsuaem Municipality of the Western Region yesterday, 26th August 2020, erupted when Dompim-Pepesa Chief Palace was set ablaze.

After the incident officers from the Ghana Police Service in the Western Region and some macho men have been allegedly fingered in the acts.

The police are said to have stormed Dompim-Pepesa palace to eject the embattled chief, Ohyeawora Biam Nyonwa Panyin with unconfirmed court order.

Meanwhile it is once again alleged that some unidentified macho men were also at the scene when the incident happened.

The Dompim-Pepesa Chief,
Ohyeawora Bian Nyonwa Panyin
confirmed the incident to Vision1 FM Western Regional Correspondent Benjamin Bray that
at the hours of 5:30am he was asleep when his spouse alert him that police officers and other men have stormed the palace premises.

According to the victim, the police began to remove his family members from the palace where their rival macho men also started to dismantle palace furnitures.

Nana Ohyeawora emphasize that he didn’t received any documents “court order” when the alleged police and macho men stormed Dompim-Pepesa palace to execute their intended purposes at the palace.

The Chief, Ohyeawora Biam Nyonwa Panyin said about three teargas were fired into the rooms at the top floor where he and his family were hiding including his 8 months old baby.

Information gathered indicate that, after the teargas were fired Ohyeawora Biam, 8 months old baby and the rest of the family members escaped through a window frame where they were hiding.

Report that is gradually reaching Sekondi-Takoradi Community reporter indicate that Ohyeawora Biam Nyonwa Panyin was found guilty on a traditional ruling concerning chieftaincy issues in the area where Ohyeawora proceeded to Sekondi High Court for an appeal court.

Moreover as to who set the Dompim-Pepesa palace ablaze is yet to be identified.

Meanwhile the Sekondi High Court is said to resume sitting on the Dompim-Pepesa chieftaincy disputes on 15th October 2020.